The Power of Placemaking. - Because Brands Matter
15962
post-template-default,single,single-post,postid-15962,single-format-standard,ajax_fade,page_not_loaded,,qode-title-hidden,qode-child-theme-ver-1.0.0,qode-theme-ver-9.2,wpb-js-composer js-comp-ver-4.11.2.1,vc_responsive 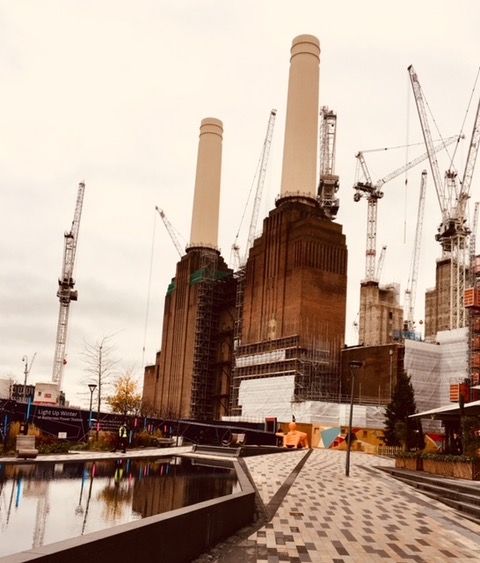 19 Dec The Power of Placemaking.

Posted at 18:59h in Uncategorised by davidreid

The redevelopment of Battersea Power Station (BPS) is both a herculean and hugely ambitious engineering undertaking, covering not just the footprint of the Grade II listed building itself, but a 42 acre expanse of land that it sits within. It is undoubtedly one of the largest regeneration projects seen in Europe during recent decades. As Nick Peel, Head of Estates and Asset Management at Battersea Power Station Development Company (BPSDC) puts it “We are literally building a small town here.”

BPS is of course, an industrial icon for both Londoners and untold millions around the world, who take pleasure from gazing at its uniquely commanding presence. But in recent times this love affair has become severely challenged. Since closure in 1983, BPS has stood alone. Irrelevant, emply, neglected and silently crumbling. Street research showed that locals were extremely angry it had been allowed to fall into such disrepair.

For more than three decades it has acted as a constant reminder of the tension that exists between visions of the art-of-the-possible and the pragmatic reality of developing a building and surrounding land that was perhaps just too big and too financially unwieldy to take on.

There have been several false dawns throughout the redevelopment process. Since the decline of post-industrial Britain in the 1970s, planners, architects, investors and developers have found it impossible to conjure up viable propositions that would achieve the right balance of use, density, look and feel.

This all changed in 2012 when BPS was purchased by a Malaysian consortium, possessing both the financial clout and creative ambition to deliver something truly special.

The management team called upon renowned masterplanning architect Rafael Vinoly to create a phased development of the site, commencing in the west and moving to the east. At the centre of both his and their philosophy was a deep understanding of the importance of having a robust and evolving placemaking strategy.

This philosophy is evident in BPS’s own Placebook “Cutting edge placemaking is now about achieving a seamless experience of the physical, the social and the virtual. To succeed Battersea must operate simultaneously as an exciting real and digital environment with a genuine sense of community.”

As well as Vinoly’s creativity, the site will also possess significant architectural contributions from the likes of Foster + Partners, Gehry Partners and Rijke Marsh Morgan. In the words of Rob Tincknell, Former CEO of BPSDC “Our approach to The Power Station project is ambitious, complex, nuanced and multi-faceted.”

With ground having been broken in 2014, construction is continuous 24/7,which helps to explain why the cost of the development to runs at £2m every single day. This figure sounds ludicrously large, until placed within the context that overall, BPS is a £9bn development that is 100% on track for completion in 2021. (Interestingly The Domesday Book of 1086 lists the area of Battersea’s net worth as being £75, 9 shillings and 8 pence).

The refurbishment has come with several well documented challenges, The four original iconic chimneys needed to be faithfully recreated as their predecessors were literally disintegrating internally, with a thick asbestos membrane essentially holding them together.

Whilst the famous brickwork has been retained, more than 1.8 million bricks needed to be ordered at Imperial size from the same brickworks that helped fashion the building back in 1930. Such deference to preserving the heritage and importance of BPS is hugely commendable and it is reassuring to know that the Art Deco interiors of Control Room A have largely survived damage. Recreating collapsed flooring within the original Turbine Hall has also been a monumental challenge with no less than 24,000 tonnes of premium quality steel being required to bring the building into its full mixed use state.

And what a mixed use plan it is. 864 Apartments, two floors and two retail boulevards, numerous offices, thirteen restaurants, not to mention a cinema, art spaces, indoor golf, a music venue geared to breaking new acts and potentially even a radio station.

As stated in BPS’s own Manifesto, “To evolve from a pioneer community to a mature city quarter needs careful curatorship, giving each stage its own magnetism. Battersea Power Station will be a real place for real people to live and play, not another dormitory development on London’s riverfront.”

Phase One apartments that curve around the Power Station, were sold off plan in 2015. Although all are highly prized and presently lived in, many of these apartments were bought for investment purposes and a £500k initial down payment, now command seven figure sums.

Phase Two apartments within the Power Station itself range vastly in size and price. A 400 sq ft Studio Apartment comes in at circa £1m, whilst the largest Penthouse Apartment with stunning panoramic views of the entire city have already set a private buyer back a cool £45m.

Tech giants, Apple will become the anchor tenant in the newly developed site. Their new UK Headquarters, will see 3,000 employees accounting for no fewer than 6 floors within the Power Station building itself. With a keen emphasis on health and wellbeing, The Californian superbrand plans to actively encourage walking and cycling to work as well as regular gym participation.

As well as looking to protect the future wellbeing of their team, Apple also plan to reference the past, by retaining the graffiti that enthusiastic ravers sprayed on the walls back in the 90’s. Whilst these are certainly not of Banksy quality, they do provide a humorous snapshot of Pre-Millennial Britain and re-emphasize that this is an organisation with unapologetic mischief within its DNA.

Already there is a huge emphasis on curating the types of business that BPS wishes to attract. Whilst aficionados of Starbucks, Pizza Hut and McDonalds might be disappointed they are earmarked for more marginal plots within the placemaking scheme, those seeking a more independent experience will be delighted by PBSDC’s desire to bring smaller ‘challenger brands’ to the fore.

This is a masterplan that fully embraces sustainability and progressive transportation strategies. Cars are sparingly catered for and in keeping with Transport for London’s guidance policy, only 0.2 car parking spaces per apartment will be provided. (Although the lady who has bought the £45m apartment is likely to have already negotiated more favorable terms). Additionally, the site will be accessible by motor launch and in 2020, a purpose built London Underground station.

The delivery of retail goods has been carefully thought through too. A roof based ‘Drone Park’ on top of the Power Station itself is planned to bring in supplies and subsequently minimise traffic congestion.

There is no doubt that the management team at BPSDC and the site owners have an extremely strong idea of what it is they want to do, how they are going to pull it off and why they believe that up to 40m visitors per year will come. To my mind, having had the pleasure of taking a hard-hat tour around the site, they have certainly presented a compelling vision of how to take a derelict swathe of industrial land and almost exactly 100 years later, turn it into a best-in-class placemaking fit for the 21st Century. I think it is going to be eye-poppingly good.

Rob Tincknell again sums things up nicely. “We believe we’ve produced a totally new recipe for how to combine the design, content, management and identity of a place. We think that as a result, Battersea Power Station will be quite simply, a feast for the soul.”